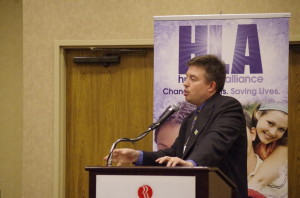 Last night, Alex Schadenberg (of the Euthanasia Prevention Coalition) was the first speaker of conference.
—-
In the US the proponents are pushing Assisted Suicide (AS). In Canada they’re pushing Euthanasia (EU).

EU-Intentionally cause the death of someone.
EU is seen as a form of homicide in US
EU legal in BE-NE-LUX (Belgium, Netherlands and Luxembourg)

AS-Someone is directly and intentionally INVOLVED in someone else’s death
Usually by Physicians with a lethal dose.

Often they’re the same thing… in AS some can’t take it themselves, so someone else steps in, and its EU.

Someone else is directly causing in your death.

The current Law is that someone else can’t be involved in your death.
The laws are there to protect you in the lowest time of your life

We all go through difficult times of our lives.

Most people who get cancer, have the normal human reaction of depression.

The law protects you in this time.

Vulnerable people- not just People with Disabilities, but every one of us will be vulnerable at some moment in our life.

The other side says it’s about freedom, but when is it freedom when someone else is involved in your death.

Vulnerable because you’re dependent upon others.
Right now we’re all equal under the law. No one can kill you, no one can be involved in your death.

AS laws, give the DR power over your death.

Why would someone ask for suicide? There could be all sorts of reason. I could simply be asking for help!

Groups in Canada and groups in the US claim that Oregon is a Nirvana. Where no abuse happens, but this is not the case.

Some argue that AS is legal in MT but that’s interesting.
Lower court claimed “right to assisted suicide” in MT
Appealed 6-1 vacated that decision, but found that if a DR was prosecuted over AS, they could use the Consent defense.

Last several years there have been bills to try to reverse that. Last year passed in house failed by 4 votes in senate.

NM County decision has been appealed. It’s very unlikely at this point that a DR would do an AS considering it’s ambiguity in NM.

2014 spring
NM attn. general appealed
NH massive victory 219-66 Democrat state
CT bill held off
MA bill held off
Being held off in NJ
And GA has tightened law against AS

The other side is working very hard to win these states.

In the mid 90’s EU was used for psychological pain by Dr. Shabatt, Court decided suffering is suffering therefore it’s OK. But you can’t define psychological pain.
2002 codified in law what has been decided by courts. Limited EU to 12 years old. Courts had already allowed EU for infants with disabilities in the 90s.

Groningen Protocol, codifies what you must do to EU a newborn infant. Approved by DUTCH MED ASSN. And is legal, by lack of prosecutions.

Who are these children? Spinal bifida

The G Protocol is based on 22 infants who had been EU.
The eliminate newborns with disabilities whether they are terminal or not.
Solely based on the concept of possible future pain.

Belgium never had court cases. They legalized in similar way as NETH, but as a FORM of medical treatment.

In Belguim it passed through the palliative care system.
Worldwide, very few places to legalize it.

Australia and Tasmania have fought off efforts.

The other side is organized on a worldwide basis.

In CAN AS was approved by a lower court in BC, and that laws against AS were unconstitutional because it was a discrimination against people with disabilities. Because an abled body could kill themselves without help, but a person with disabilities couldn’t kill themselves without assistance. The other part of the decision is that there was no fear of abuses, since it “hasn’t” happened in other countries. (The Oregon Nirvana argument)

This ruling was challenged by the federal government, the BC high court struck it down, and now it’s going to the Supreme Court.

There is no right to Suicide in CAN.

The other side is getting more and more organized, and have money.

But we have people, and we’re very strong together.

We’re at the edge of a precipice.

And no one should be involved in killing another person.

We don’t have tons of money but we have people.