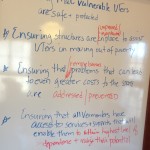 Boldly displayed on a dry-erase board in Room 46 at the Vermont Statehouse, the meeting room for the House Human Services Committee, is a short list of principles the Committee has established to guide them as they consider legislation that affects Vermonters. The very first goal listed is: “Ensuring that vulnerable (Vermonters) are safe and protected.” After two … END_OF_DOCUMENT_TOKEN_TO_BE_REPLACED

The following is the written testimony submitted to the House Human Services Committee, and given in person by Lynne Cleveland Vitzthum of the Vermont Center for Independent Living.  Kudos to Vitzthum for staying on message through repeated attempts by Committee Chair Anne Pugh to insist that disabled people are not vulnerable under this law.       This testimony and … END_OF_DOCUMENT_TOKEN_TO_BE_REPLACED

Here is a link to disability rights activist Stephen Mendelsohn’s wonderful testimony at the March 18, 2015 public hearing on the assisted suicide bill currently under consideration in the Connecticut General Assembly (HB 7015). Stephen is a leader of Second Thoughts Connecticut, a group of people with disabilities fighting the legalization of assisted suicide because it … END_OF_DOCUMENT_TOKEN_TO_BE_REPLACED

Many Vermonters would be stunned to learn that some eighty years ago, our legislature passed a law enabling the sterilization of Vermonters who had been determined to be “undesirables,” people from targeted groups that included Abenakis and French Canadian immigrants. The 1931 sterilization law was designed to reduce the number of people seen as placing demands on public … END_OF_DOCUMENT_TOKEN_TO_BE_REPLACED

Over its years of fighting assisted suicide, True Dignity has become acutely aware that medical care of people with disabilities is fraught with discrimination: there is a dangerous assumption, on the part of able- bodied people with power, that certain types of life are not worth living and should be brought to a quick end.  Bill Peace’s article about his hospital experience … END_OF_DOCUMENT_TOKEN_TO_BE_REPLACED