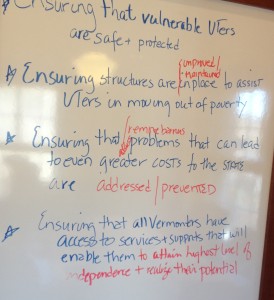 Boldly displayed on a dry-erase board in Room 46 at the Vermont Statehouse, the meeting room for the House Human Services Committee, is a short list of principles the Committee has established to guide them as they consider legislation that affects Vermonters.

The very first goal listed is: “Ensuring that vulnerable (Vermonters) are safe and protected.”

After two days of testimony and discussion by the Committee on the topic of S.108 and the specific question, “Is Act 39 working?” it seems clear that at least some members of the Committee have chosen the “see no evil, hear no evil” approach to evaluating whether vulnerable Vermonters are safe and protected under this dangerous law.

We know that the Committee refused a request from a person from the disability rights community who had wanted to testify about her complicated but very real experience with how legal assisted suicide contributes to suicide contagion.

In a Forbes Business Online opinion piece Dec. 29, Forbes writer CJ Arlotta discussed suicide contagion following on the heels of the high-profile story of Brittany Maynard, the terminally ill 29-year-old woman who was made famous by right-do-die advocates by ending her life November 1 under Oregon’s assisted-suicide law. He quoted Dr. Will Johnston, chair of the Euthanasia Prevention Coalition of British Columbia, who said, “We see how suicide contagion works when the media admire the suicidal person and speak of suicide as a form of heroism. I hospitalized a young suicidal patient 10 days ago who told me how he had done an Internet search for suicide drugs after watching the slick video glamorizing Brittany which was produced by the Hemlock Society (now Compassion and Choices).”

Scarily-enthusiastic proponent of assisted suicide Dr. Diana Barnard, who testified before the Committee by phone on April 16, stated repeatedly her opinion that what has happened in Vermont so far “mirrors Oregon,” and that she expects that mirroring to continue. One might fairly conclude that if Dr. Barnard is correct, the incidence of suicide contagion in Vermont will also mirror the pattern in Oregon.

Are we willing to accept even one such death as a result of Act 39?

If our Legislators are truly committed to examining “How Act 39 is working,” they need to take time to listen to people like Meghan Schrader and to be willing to consider whether the cracks in this bad law are too big to fix.