Here are the rest of my notes on the CT Hearing for HB 5326 the Assisted Suicide bill.

(The video by CTN of the whole hearing is located here) 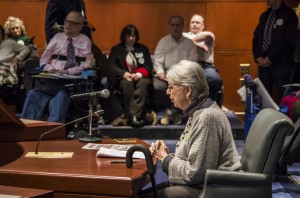 “I am worth of the same mercy as a dog” that gets put down. 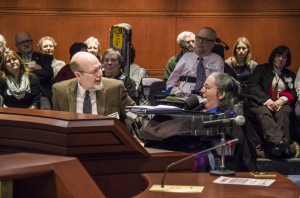 The disability community has an important perspective on this issue. Why is this a problem for so many of us?

After 3 years of PAS in Washington state, a column in the newspaper suggested Involuntary Assisted Suicide.

Focus on what people actually need to make their lives fulfilling. 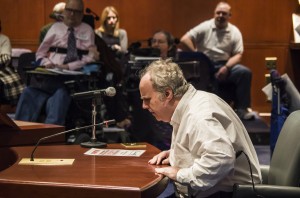 Unanimous opposition to bill at the most recent meeting of their council.

This law will decrease self determination due to economic pressures, limited coverage for home care, etc. the least costly avenue may be promoted by Dr.s insurers and family members.

In Oregon, most people who chose this,  say they didn’t want to be a burden to their loved ones.

–deprivation of treatment, no requirement for reporting to the State department of Public Health, no amount of safeguards would provide ultimate protection.

I agree with your concerns and I think about the oregon experience, where the health care would not provide treatment but offered to pay for the end of life with PAS.

–Sadly this proposed legislation pays for suicide but does not provide community supports or other treatments that remain underfunded. 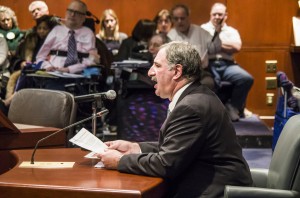 In July 1991, I slipped a plastic bag over his head and the next morning the doctor pronounced him dead.

As someone who makes policy, one of the struggles we have to think about is taking the individual testimony and the policy set for the state of CT.  Including rates of suicide rising, to 41% of the national average.

The right of individual trumps the other effects upon society?

–Certainly no one’s ever accused me of being a libertarian, but  I think in this case, yes personal choice trumps any other consideration. I want to enable the individual to make their own choice.

I struggle with saying that we’re presenting a choice. With health care resources being fewer and fewer. In Oregon, the state run system has not given people a choice but pressured people to PAS.

With states taking more of the mantle of healthcare, the basis is not profit but what’s least expensive.

Most homecare is medicaid/medicare.

Why do we need a bill that involves healthcare providers?

–in some instances the individual is not able to carry it out themselves, so I think this bill would help

But in this bill, they must be able to carry it out.

And health care provider doesn’t have the right to refuse aid. 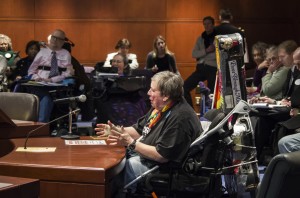 There are situations where disabled people are murdered without consequences. Because of the prejudice of Ableism. People with Disabilities are not respected in our culture.

“Do not pass this bill, It will endanger people with disabilities. And it will tell us that our lives are not worth living. And we know they are worth living.”

Is there anything that’s worth recovering in this bill? This is not for disabilities it’s for people at the end of life.

NE regional director of progressive  Not dead Yet

We’re against it on progressive principles.

People who want to pass on their money, may rush to death or be pushed by their family.

Only 2% of patients in Oregon are referred for psych eval.

–if I were to stop treatment, I’d become terminal. In Oregon we see Diabetes, MS and lower respiratory disease using PAS. A friend at 19 in 1955, diagnosed with ALS, and 60 years later he’s alive and if PAS was available, he would have taken it in 1955 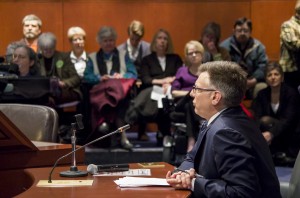 Death happen with some control, etc.

–Admits we Should be concerned about coercion.  Been with C&C since 2005.  Mass leg and NJ are considering the bills. “an increased demand by individuals” across the country

ER nurse Philly who assisted the death of her father.

And prosecuted for the past year.

“We’re not calling a spade a spade, despite the verbal sleight of hand, at the end of the day some one is dead by their own hand- That’s Suicide”

When you get the bad news, it’s easy to plunge into depression.

The experience in other countries is that these fences tend to crumble.

This bill and the culture that it represents will change our trust in the medical profession, the insurance companies and govt agencies

This is assisted suicide

The AMA said the Blick argument  that “Aid in dying is not Assisted suicide” is Novel in it’s approach.

Oregon’s doctors has had abuse, it’s self reporting only if the health care provider is present. 11 out of 271 only.

This is not about pain. Pain can be managed

This is not about choice. Listen to the disabled who are afraid of being pressured to die 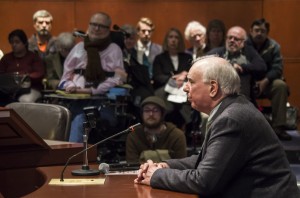 Bramford. Hospice work for 7 years, only 4 out of 5000 patients had conversations with him about assisted suicide.

Bill requires falsification of medical document. It’s against the law.

This law promotes incivility of a radical kind.

we need to let more people know about the facilities of hospice.

–What we need to do is improve the care of these patients who’ve suffered pain.

What do you do with people with ALS?

–principle of double effect: “if my aim is to relieve their symptoms, and they are willing to accept sedation” often their life is prolonged, usually it’s kept the same, and sometimes (rarely) it’s shortened.

–People with these conditions, may be ready to die on Monday, but by Wednesday they may be promoting life values, etc.

“There are another of ways to battle on and a number of ways to end our lives” “All of us want a peaceful death, a death with dignity”

(Apparently the disabled don’t have dignity) 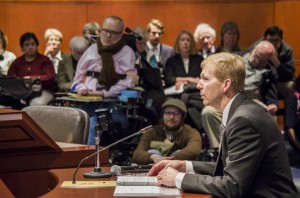 It redefines suicide and Dignity.

Primary objection is “a qualified patient” is difficult to determine

The desire to end one’s life is symptomatic of Depression. The frequency of these depression symptoms in terminal illness is under diagnosed.

Thus many would be determined to be Competent when they are not.

–it’s devastating. PT status after that (PTSD). There is not much harder to deal with than that.

When we’re talking about a psychiatric population that might have depression and might be suicidal, but how do we differentiate between those who need help and those who don’t?

–I don’t know how you can differentiate between those.

“Are you saying that if there someone who chooses to end their life, they are necessary depressed?”

–yes, (and that is the diagnostic criteria.)

Mother had allergy to morphine and lived the end of her life in pain.

How does that necessarily mean they are depressed.

–The thought that I want to end my life is a very significant mental distress, I know because my mom went through it. (Also) 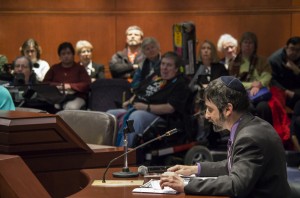 It’s all about them, not about the collateral damage to the rest of society.

Prescription of elder abuse on a mass scale.

Family and community do not matter. It’s all about me 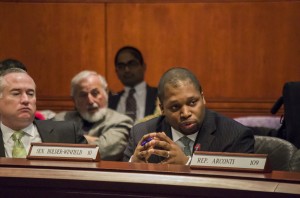 –Barbara Coombs Lee wrote an op ed in the oregonian, that the Oregon medicaid is right to ration care and steer people away from aggressive procedures.  We just had a debate here on friday. On MOLST All who are opposed to this bill were here. When asked on the MOLST bill, C&C had nothing to say on the bill, and instead talked about today’s bill.  If they really believed in choice, why aren’t they doing anything to improve other areas where there is a lot more consensus.

–Ira Byock who is a Staunch progressive democrat, says that PAS acquiesces to social failures “My choice my death, why do we have suicide prevention?”if they take it so seriously, why do they have it?

–the First response people have when they hear about PAS is it’s about compassion, it’s about choices, then people have second thoughts when they learn more about it. In areas where there is serious levels of undertreatment, in african american, latinos they turn against it.

–I’m talking about the leadership who deny deny deny collateral damage, they have no answers on other areas to help choices.

–dig deeper than choice and look for all the problems and damage that it causes to society.  We in the disability community, could not live one day when the world is all about Me, myself, and I. Why are the leaders in this Assisted Suicide movement not caring about the suicide contagion. Why is it a narrow focus only on this picture and not the broader issue? 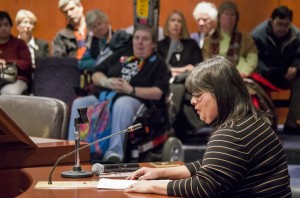 NE Aids Education and Training Center, here as a private CT resident in SUPPORT of bill.

If I ever make this choice I want to be at home with my cats, and my friends there. One more option for Dignified Death in the state of CT. 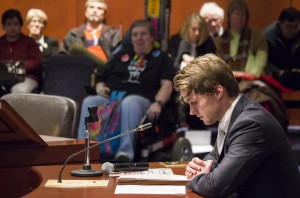 –I love the platform of transparency that states with it have…

–Oregon’s 16 years of data, under 3% were financially motivated in their end of life decision.

The people making these decisions are “well educated, non-minorities”

Yeah gotta love how “transparent” the reporting is, when it’s not required in the majority of cases, and it doesn’t keep track of alot of data.  And VT and CT don’t even have that “transparency”. 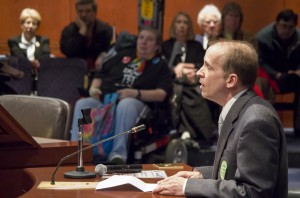 UU pastor. FOR it

Aid in dying preserves “human dignity at end of life”

If you think we need to make changes, then there are not adequate protections in this bill, is that correct?

–no, no I don’t think we need to change the bill. The legislature should look at the ableism phenomenon.

(Yes, let’s strengthen the bill, and not change it…)

those two thoughts together are very very scary. If there is already an ableism, then we should not be passing this. 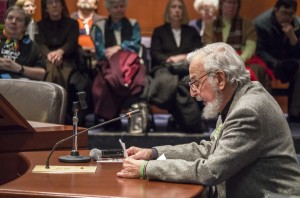 Story of a colleague who was a cancer Dr. had a highly invasive bladder cancer.

Wants the “Legal and moral right to determine when I die.”

(Apparently the legal right is equivalent to society’s moral acceptance… no no, we’re not trying to impose our views on society, not at all, we just want to change society’s morals.) 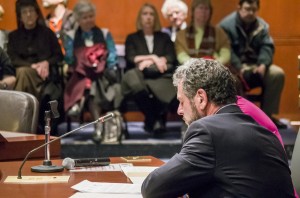 Doesn’t see how this bill is inconsistent with hospice.

This is not inconsistent with my Oath of Maimonides that he took when he graduated.

(Note that he did not take the hippocratic oath)

Voted against the ballot, and for the repeal in Oregon, Now believes it’s cavalier, and would instead vote for it this time.

You have a company called end of Life care consulting. Can you tell me what that is

–I work with people who are trying to make end of life decisions. Most often for family members who have to make decisions for others.

–Barbara Wagner, was denied access to an experimental treatment by the Oregon health plan. Letter outlined all of the options. She was eligible for other kinds of aid not only PAS (15 options).

(But they still said they’d pay for Assisted Suicide… isn’t that a bit insensitive to tell someone that they can’t have treatment but they can commit suicide?) 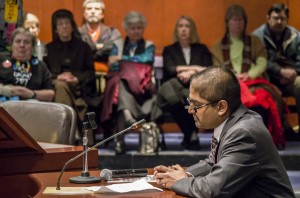 Med student at Yale FOR

Story about patient who withdrew his own feeding tube.

Offer my future patients a choice. 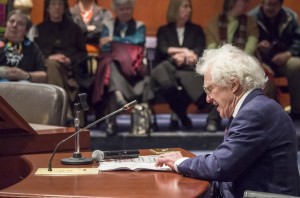 Choice should be personal and private.

Ensure the right choice for the people of CT.

(They already have the sad choice for suicide, why make the state complicit?) 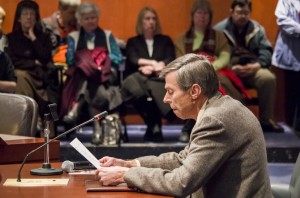 Who killed his Mother.  Upon her request/direction. 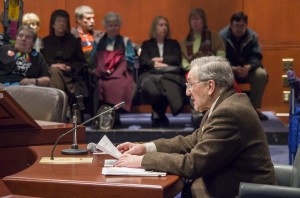 Bill grants freedom to some, and does not interfere with freedoms of others.

Was in overflow. Nurse (RN) in CT asked to swap with Margaret Dore from Washington.