Margaret Dore had a brilliant legal-minded testimony you can view it at the CTN Video Circa 6:07 mark. Below are notes on her testimony 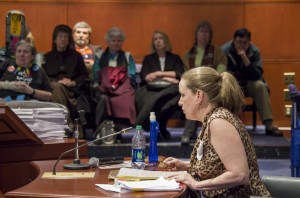 What does the bill actually say?

the bill is not what it seems to be

self-administer allows someone else to give it to you, which is Euthanasia.

She is a Former clerk for Wash. State Supreme court.

has seen lots of elder abuse

Assisted Suicide is NOTlegal in Montana. “I’m attorney of record for Montana.” And it’s not legal, it’s hotly contested.

There are 2 parts: the lethal dose where heir who will inheirit can talk for you.

It’s water soluble, so it could be done while they sleep.

Montana/Baxter case. PAS is not the law in Montana?

–Baxter is hotly disputed, it’s a case. About a statutory determination that was given a defense. No law in Montana, and the case is still in dispute. It’s not legal. http://www.montanansagainstassistedsuicide.org/

Look at the Language “self administration”

–in the CT. patient “MAY” self administer, nowhere does it say MUST

–self-administer according to bill is the act of ingesting. Ingesting is not defined, except by dictionary, absorbing, inhalation, etc.

As it is written, and as courts may interpret, your saying that others could give it to you.

–its neutral on who gives it to you, it only says how it would be done.

–“Aid in dying” is a bad phrase, because it implies people actually dying.

–The bill is cutting a wider swath than you may intend.

–Diagnosis and prognosis could be wrong.

You’re an elder law attorney. you say this is a recipe for elder abuse.

–Your heir is allowed to be a witness for you to commit PAS, but if an heir is a witness to your will, there is a presumption of undue influence.

–For one client, First night the parent said No I don’t want to do it. But Second night the patient was drunk and took the fatal dose at a second party.  The client decided not to pursue it any more, even though it was suspect.

–There is no transparency, no health dept reporting, or ability to investigate (no power), and falsified death certificates,

–I don’t think you can make it safe.

–Morphine abuse already occurs in hospital, and caregivers/health care workers have to be constantly on gurad.

–Example of a Doctor turned down a patient who requested it. The Patient thanked him. (Letter on website)

–It’s more complicated emotionally and legally. (than what this bill leads you to believe)

–Focus on what it’s said. Self administer does not mean what people think it means.

Whats the difference between Oregon and Wash law?

–You’re law is less transparent, because there is no reporting

–New Mexico is on appeal